Well this sure has been a funny week. A is growing up before our eyes and has made some huge leaps since turning 10 months, not least in sleep which I wrote about earlier in the week. Along with this new napping has come new games, movement and noises. So with that in mind I thought I would do a series of posts all about the different types of playing that A does.

I wanted to talk this time about sensory play. Firstly, because it’s something I knew about before having a child. My training in early years and experience working in an autistic unit meant I spent a lot of time setting up sensory play and thinking about the learning that could be gained from it. Secondly, because it’s an area of play that A is able to access more and more as she grows and she is more able to move independently.

Now, of course, at the age of 10 months pretty much all the play is sensory play. A still chews everything as her sense of taste and touch in her mouth are particularly sensitive at this stage. However, I’m going to talk about play that her mum and I have designed to stimulate sensory development specifically rather than an other skill (like music, movement, speaking etc).

What do we mean when we say sensory play?

On the whole when parents and teachers talk about sensory play they mean activities and games that are designed to stimulate one or a few of the 5 main senses and predominately touch, taste and smell and sight (hearing usually gets covered in music but it could easily come under this too).

As everything still ends up in A’s mouth, it’s always important for us to bear that in mind so we put out either things A can put in her mouth safely or things that are appealing and stimulating to her mouth.

So what have we actually been up to?

A great example of this was a simple tray with ice and pompoms in a double zip-lock bag and an old plastic drinks bottle filled with water beads and screwed up tightly. 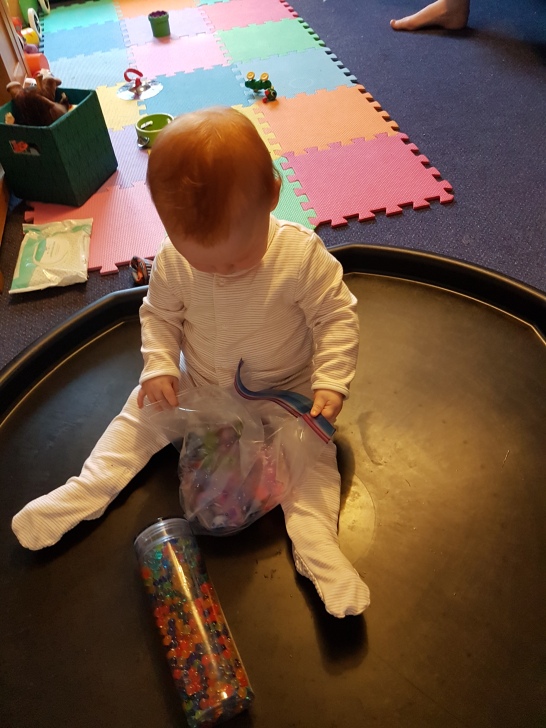 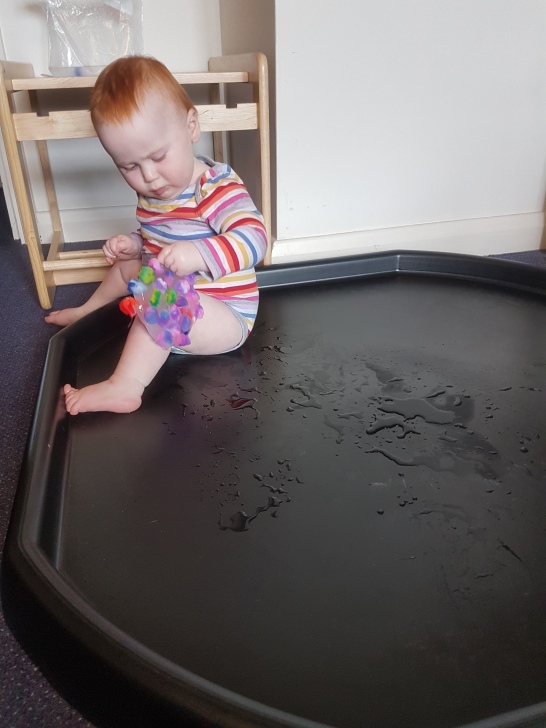 The tray helped, firstly, to contain the heavy bag of ice (and later the ice block itself so A could better explore cold and melting) and the sensory bottle in a defined area. Having separate areas for play helps young children with their own cognitive planning and organisation and I saw no harm in introducing this to A. It is rare that something set up in the tuff tray goes out onto the sitting room floor and we have been using it for a good few days now.

The sensory exploration was great for A. She loved the feeling of cold and shaking the colourful water beads and wanted to go back and explore the sensations over and over. (A great sign in my book that she enjoyed herself!)

This is a fairly simple sensory play idea but does take a bit of kit that not everyone will have (a tuff tray). But you certainly don’t need one to do sensory play with a little one.

A handling water beads in a double zip lock bag 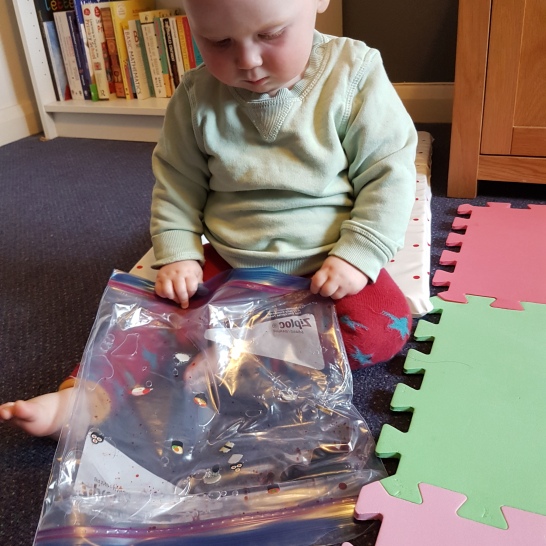 A with food colouring, water and oil with some shapes in a double zip lock bag

A handling water beads in a double zip lock bag

A close up of a double zip lock bag with water, flour and two different food colours

Here my wife made a little sensory set in zip lock bags (double bagged to withstand punctures from sharp new teeth). In one bag there was orange water beads (they stayed in the bag to avoid the choking hazard). Touching these was a whole new experience for A: she loved shaking them, slapping them and generally exploring this new sensation. Another bag had food colouring, oil and water in it along with some sushi shapes that we had from our honeymoon to Japan. A enjoyed watching the shapes and oil move in the water and mix and then separate from the food colouring. Her concentration on this one was great and she would happily sit for 5 minutes (a long time for any 10 month old) slapping it and watching it all move around. The last bag was a mix of water and plain flour in two bowls with two different colours of food colouring then brought together in the zip lock. A loved mushing these together and putting her feet on the smooth, squishy surface (almost as much as her mum did). The colours soon all merged together into a brown and so it lost some of its appeal but it was still fun while it lasted.

Throughout the week that we had these around, A would go back to them again and again. They also helped her move away from entirely shove-it-in-your-gob play and helped her see that other sorts of interaction with objects could be enjoyable. The increased level of concentration was also great.

There is so much more we can do with sensory play and will be exploring where else we can go with this as A grows and we come across new ideas we like.

So that’s it for sensory play. Tune in next time for more on how A likes to play. In the mean time, what have you guys been up to? Do you have any cool ideas for sensory play with babies? Let me know in the comments.