So its been a while since I wrote anything. It’s been a busy few weeks; Easter, travelling to York, visiting aunties, uncles and cousins and learning about travel sickness and how to fall asleep in a car seat.

Possibly the best thing that happened for me was that it finally stopped raining all the time and I got to walk through sunshine in search for naps. Alongside this, as we were visiting my parents, A’s mum and I didn’t have to do all of the nap walks. This has resulted in me gaining three pounds (a small price to pay for a modicum of free time!) The buggy remains invaluable as it’s still the primary way to find naps. You can read my thoughts on the buggy here.

We travelled up to York for A’s third visit to her ancestral homeland on Good Friday and stayed 10 days. It’s so lovely to see A building a relationship with my parents and brother, whenever we visit or they come and stay here, she loves them more and more. Granddad is a particular favourite; I think they speak the same language. My dad demonstrates, every time he is with A, the power of being silly with babies and children generally. It is one of the things I remember so clearly about growing up and something I am so happy he is able to repeat for my own daughter (and something I hope I am emulating myself). A responds so well to his buffoonery and has built such a strong connection with him. It’s so lovely to watch. (But let’s not tell him; he will only get a big head.) 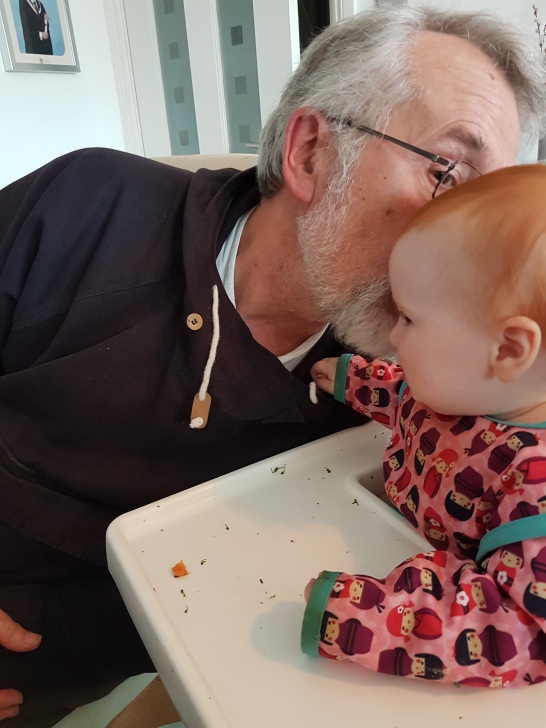 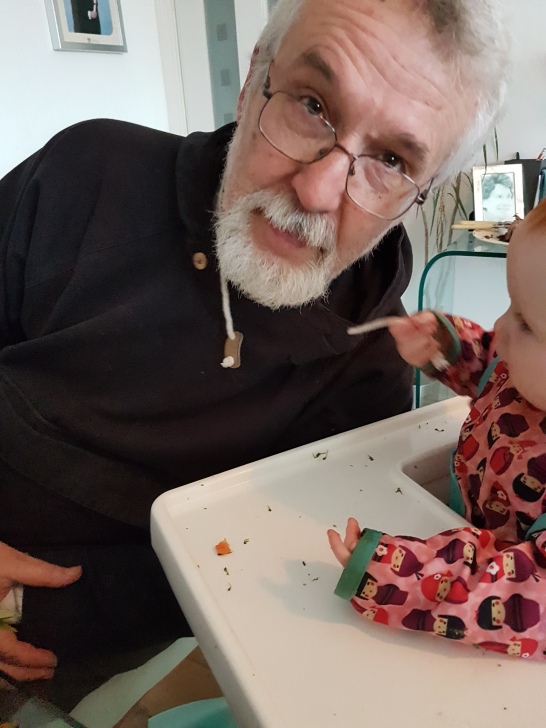 As the weather up north quickly moved from torrential downpours to lovely sunny spring, we had the opportunity to take A out to some of the many parks around York. My personal favourite, Rowntree Park, was closed for much of our visit due to flooding but the park around Scarcroft School was fantastic and A had her first go on a seesaw. There is also a lovely little park just the other side of the city walls. A loved going on the swings and watching the people walk along the walls. 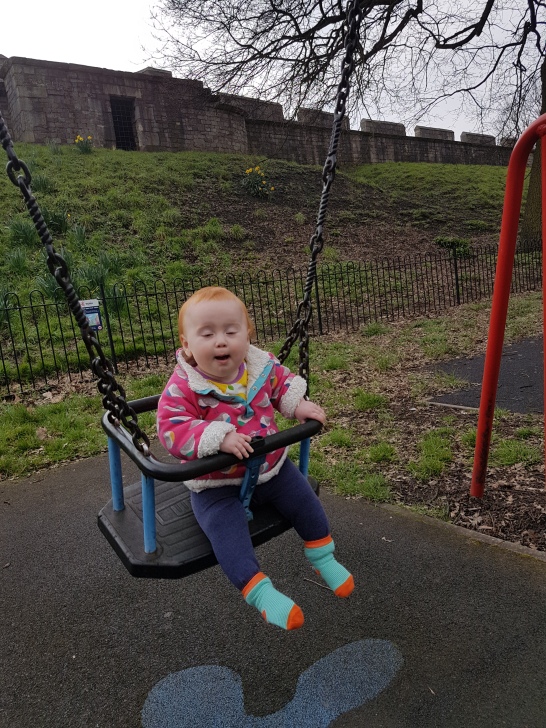 As well as the outdoor delights of York, A had some wonderful new experiences. Easily her favourite was ice cream. Whilst she had had the odd taste of this in a restaurant it has, until now, always been the lovely simple flavours of vanilla gelato. This trip, A was introduced to the huge array of flavours of English ice-cream at Licc. When I say she was introduced to the flavours what I actually mean is that her mum and I got ice cream and A did her best impression of an angry contortionist who had clearly never been fed until she was offered regular small samples of each of the flavours. I had bakewell tart and Oreo and my better half had Malteser and Smarties (as usual picking the better option.)

Another of A’s major new experience was encountering stairs. She has of course seen stairs, she has been carried up stairs but she has never really had a go at tackling stairs for herself. Well Easter 2018 saw a change to all of that! Spurred on by her mastery of this crawling malarky and encouraged by new found love of pulling herself up on any surface she can get a grip on, my daughter took her first steps towards becoming a world famous mountaineer. She had been watching people disappear up the stairs at my parents apartment for a few days with great interest before one day deciding to follow dad upwards. My wife called me down to wonder at our daughters bravery, strength and help out in the seemingly likely case of mild injury or at least frustration from the budding Edmund Hillary. 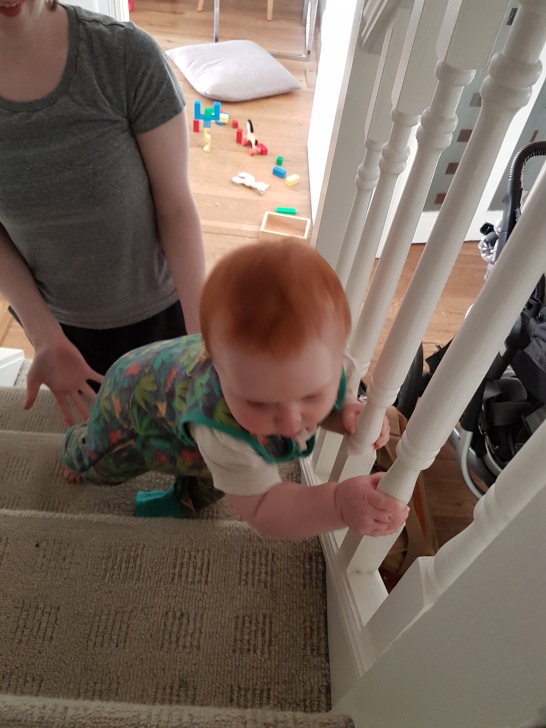 The last new experience A had this trip was travelling in a car seat, being travel sick and sleeping in a car seat (not all at once and not the same trip). We decided it was time to move A out of the baby car seat thingy she had travelled in since she was born. She had hated it when she was 6 months, hated not being able to see, hated the restricted movement and being forced into a lying position. So we got a front facing car seat. This I should say at this point is very much against suggested practice of keeping children rear facing for as long as possible but we decided that 1. A hated rear facing and 2. The number of times we would be using the car seat before she was rather older would be so small that the odd journey now would not make much difference. I made sure when I bought it that it would work for her. I got a stage 1, 2, 3 seat which will apparently last us until A is 12 (though the idea of a 12 year old A still in a car seat is not something I can imagine).

The seats first road test came on a trip to Harrogate. This is best described described as not at all successful. In an attempt to keep A happy, we decided the best thing to do before the car journey would be to give A one of her favourite yogurt pouches (a mango and yogurt one from Aldi). TOP TIP: Don’t give a child a belly full of yogurt before getting in a car and heading down some winding Yorkshire lanes. The resulting bright yellow vomit erupting from an infant experiencing travel sickness for the first time was both distressing and awe inspiring. A managed two sessions of sickness, getting through her spare change we keep in her changing bag, before we arrived in Harrogate and headed straight for Primark. Here I must say a huge thank you to the staff. I asked if there was a baby changing area and explained what had happened. I was informed there was not a changing facility but was taken up into the staff area and allowed to use their shower room to change A into newly purchased clothing and everyone was generally lovely. The simple kindness shown by the staff at Harrogate Primark really touched me. So Thank you.

The second outing of the car seat was thankfully far more successful. We went to Malton to visit A’s cousins, auntie and uncle. Not only was A not sick on the way there or back but she even managed to fall asleep. 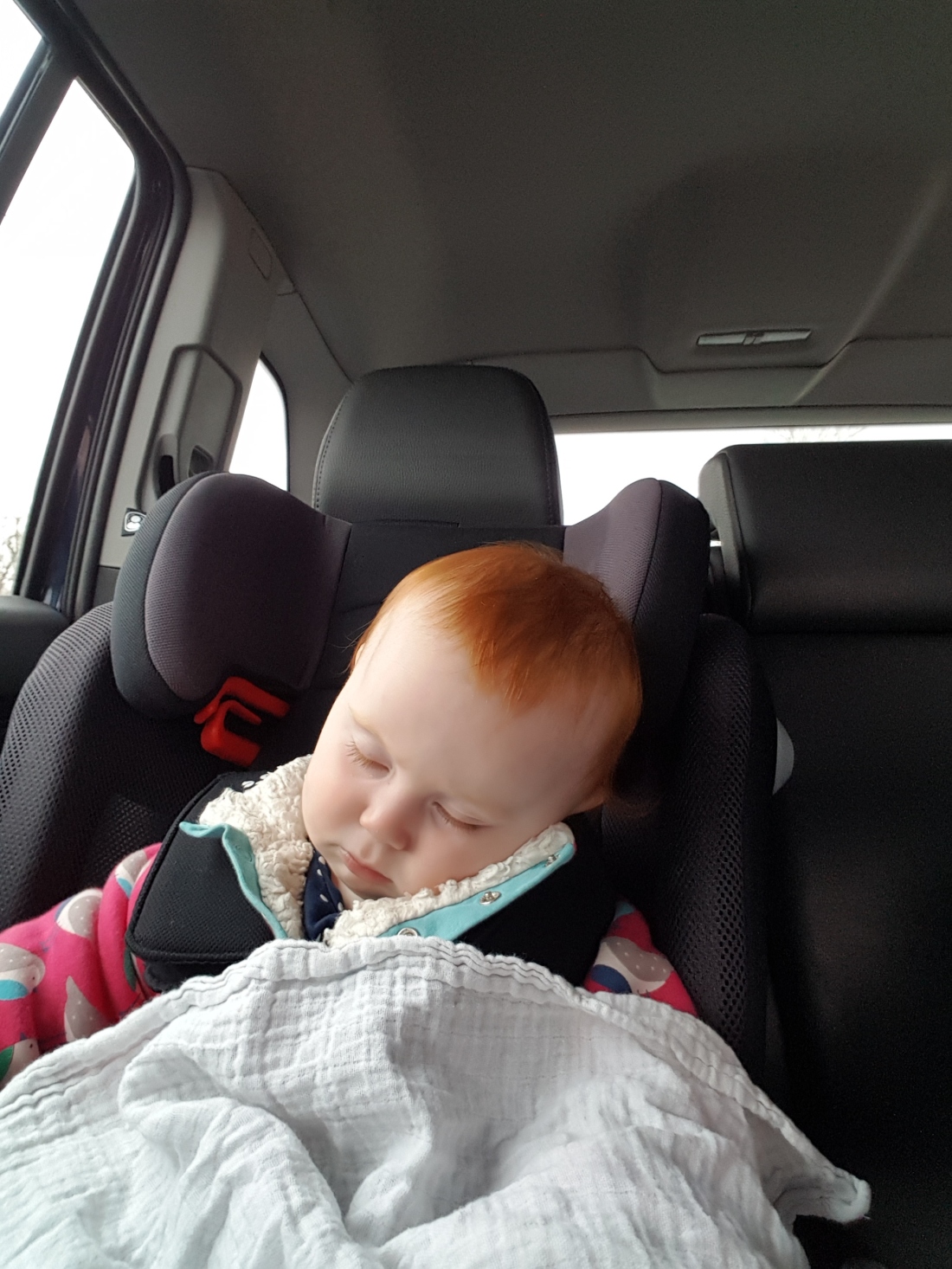 A falling asleep in the car taught us something very important. It’s all about timing and tiring her out. This one is probably obvious but having a couple of hours space between eating and travelling means she didn’t have anything in her tummy to be sick. Also, she spent the duration of the visit crawling at speed after her two cousins (3 and 6) who where very excited and fast. A loved playing with them and because she was very active the whole time she both got tired and was far too distracted to know she was tired until she got in the car!

We had such a good time up north. The trip really cemented our plan to relocate out of the big smoke and closer to family and countryside (and affordable ice-cream shops).

Well that’s all from me on this. What have you been doing over the Easter period? See you all next time.