…Have been rough. A moved from teething swiftly into a cold that in turn developed into croup which passed and left her with a throat infection and a cough that makes her sound like she has been smoking 40 a day.

Teething, which started last week, was pretty bad. It has to be my least favourite baby activity and one I am reliably informed can go on a good few years yet. Apart from anything else, it destroyed her sleep pattern. Just as she was getting into the swing of being down for 6 to 8 hours a night in a block, the pain in her gums meant she was waking up for comfort roughly every two hours. This usually ended with A falling asleep on me and me either sitting up playing on my phone as she slept on my chest hoping the light didn’t disturb her or co-sleeping in the remarkably uncomfortable single bed (allowing my wife to get a good nights sleep so she could go to work). Usually the holding up would become co-sleeping as my eyes became heavy and I decided to catch a couple of hours sleep.

With the teething comes dribbling and shoving everything in the mouth. This – coupled with the mini beast from the east – created the perfect storm of snotty bunged-up grumpy baby with a cold. There was so much snot, so many sneezes and a cough that sounded like the bark of a seal.

Now there are two things I have learnt about having a poorly baby;

In the end, just as the NHS website suggested, we made sure she had plenty of liquids and rest and waited it out for a few days. For a few days we didn’t do much. We played at home, we rested, we walked around Islington. Nights remained bad. Sleep for A was in two hour stretches and after the first one generally refused to sleep in her cot so ended up on me meaning even less sleep for me and never in more than 2 hour stretches.

The croup promptly gave way to what I thought sounded like a chesty cough but after seeing the GP on Thursday I was told this was just a throat infection that would clear up. The GP also suggested that we put a book under one end of the cot’s mattress to raise it slightly and ease A’s breathing. Since doing this her nights have been considerably better (sleeping through till 4am on Friday night!).

One good thing has happened this week. Because we have been at home a lot, A has been exploring her environment more and more. She is pulling herself up on the sofa and when being put down has been making herself land on her feat so she stands. I held her arms up one of the times and she stuck one foot in front of the other and before I knew it had begun walking! She now, when held, can walk some distance and seems to really enjoy this new vantage point. All she needs to do is sort out her balance and she will be walking on her own! Then we will really have to watch out! 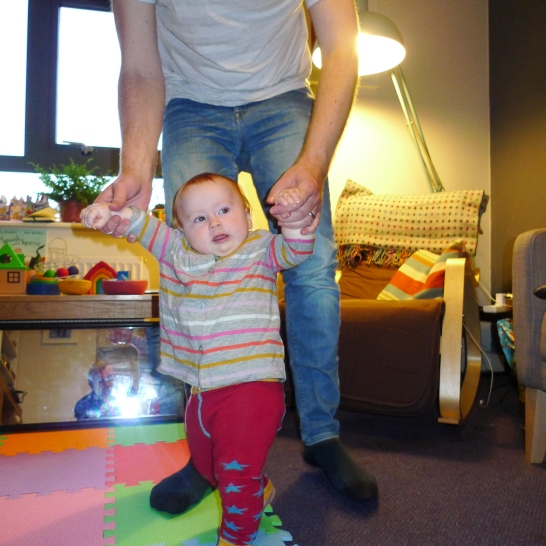 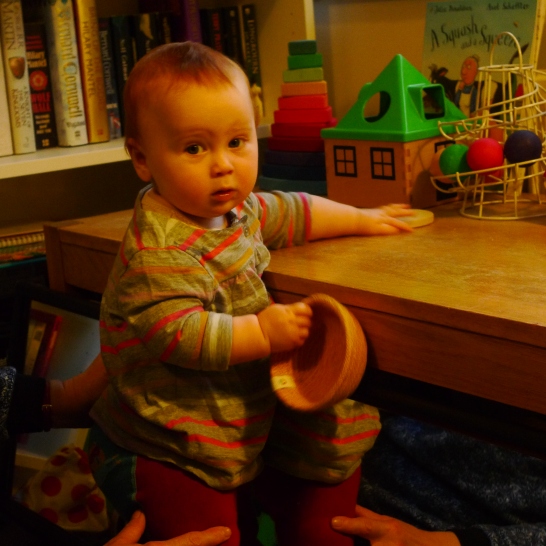 Well that’s all from me and A for this week. Hopefully next week we can tell you about the adventures I have planned for us. Let me know what you have been getting up to this last week.

2 thoughts on “The last few days…”